Shimon ha-Tzaddik said [in a baraita], “In all my life, I never ate the guilt-offering of a nazirite who became tamei [ritually impure] with one exception. Once a certain man, a nazirite [who had become tamei] came from the south and I saw that he had beautiful eyes and was handsome, with curly locks. I said to him, ‘My son, why did you see fit to destroy your beautiful hair?’ He said to me, ‘I was a shepherd for my father in town. I went to fill [a bucket with water] from the spring and I gazed down at my reflection [in the water] and my yetzer rushed over me and threatened to banish me from the world. I said to [my yetzer], “Evil one! Why are you so arrogant in a world that is not yours, with one who is destined to be [consumed by] worms and maggots? By the Temple Service, I will shave you for [the sake of] heaven.”’ Immediately, I arose and kissed him on his head and I said to him, ‘My son, may there be more who make nazirite vows like you in Israel! It is about you that Scripture says, If anyone, man or woman, explicitly utters a nazirite’s vow, to set himself apart for Adonai… (Numbers 6:2).” 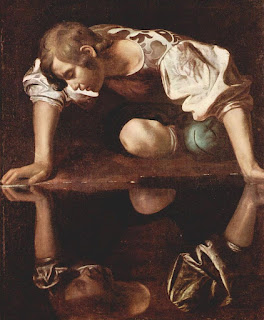 The background for this story is found most prominently in the Metamorphosis of Ovid (43 BCE - 17 or 18 CE), the Roman poet who wrote the classic version of the Greek tale of Narcissus. Narcissus, the son of a river god and a nymph, one day discovered his magnificently beautiful reflection in a pool of water. Not realizing it was his own image, he became so transfixed by his own beauty that he fell hopelessly in love with it and lost the will to do anything else but gaze at his own reflection. The term narcissism derives from this story. Many artists have painted Narcissus; my favorite is by Caravaggio (shown here to the right).

The story Shimon ha-Tzaddik tells in the Talmud provides evidence that the Rabbis were familiar with Greek and Roman stories. In this case, the talmudic re-write of the tale of Narcissus is instructive of rabbinic values.

The Rabbis were suspicious nazirites. Torah presents the nazirite as one who takes on additional vows (to abstain from cutting his hair, drinking grapes or wine, and avoiding contact with the dead) presumably to attain a greater level of holiness. But the Rabbis were wary: There are sufficiently many obligations imposed by Torah. Is this an act of spirituality or hubris? Is a nazirite someone who makes the vow because he is in control of his yetzer ra (evil inclination), or someone who is inspired to to be a nazirite by his arrogant and narcissistic yetzer?

COMMENTARY
The sacrifice of a nazirite, should he become ritually impure, or after he finished the period of his vow, was eaten by a kohen (priest). Apparently, Shimon ha-Tzaddik, a High Priest according to tradition, avoided eating the sacrifices of nazirites as a matter of personal practice. Our story concerns an exception he once made. The nazirite whose sacrifice he agreed to eat had three hallmarks of someone the High Priest and rabbi would disdain and look down upon: he was a shepherd, he came from the south, and he was, of course, a nazirite.

Shimon notices the man’s exceptional beauty and therefore asks why he would be willing to cut off his hair, as is required at the end of the period of the vow. The man replies that he once gazed at his own reflection in a pool of water and immediately felt overwhelmed by the yetzer ra—he felt in danger of losing himself as Narcissus had done. His glimpse of his own beauty risked his life, but unlike Narcissus, he pulled himself away from the brink by reminding himself that beauty is ephemeral; all are destined to decompose in the ground (here, the nazirite quotes Pirkei Avot 3:1). He thereupon took the vow to counteract the power of his own yetzer, intentionally destroying the beauty that threatened to overwhelm his character. Recognizing the rightness of his intentions, Shimon ha-Tzaddik agrees to eat, and thereby validate, his sacrificial offering.

QUESTIONS TO CONSIDER AND DISCUSS 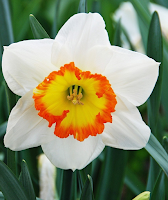 Posted by Rabbi Amy Scheinerman at 8:25 AM

I am available to visit your congregation as a scholar-in-residence.

Please feel free to be in touch with me. I look forward to speaking with you.

Rabbi Amy Scheinerman
I am a Jewish community hospice rabbi, and I teach and write. I have served on the Board of Trustees of the Central Conference of American Rabbis, and as president of both the Baltimore Board of Rabbis and the Greater Carolinas Association of Rabbis. I was a congregational rabbi for 27 years, serving Reform, Conservative, and unaffiliated congregations. You can visit my home page at http://scheinerman.net/judaism, my Torah commentary blog at http://taste-of-torah.blogspot.com, and the Talmud Blog I share with my chevruta, Rabbi Louis Rieser, at http://nuviewtalmud/blogspot.com.